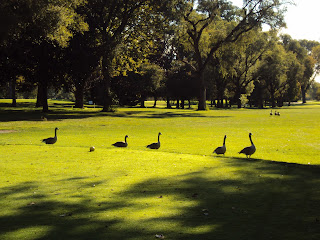 Our church has a golf outing every year and they always look for businesses to sponsor holes.  I've never been able to go to the outing before myself due to work/other commitments/lack of transportation but this year I ended up taking my younger brother and sister and going golfing.  I haven't golfed in close to 10 years so I was pretty lousy at it....and we didn't hit any geese...but it was fun.

However I was rather sore the next couple of days... 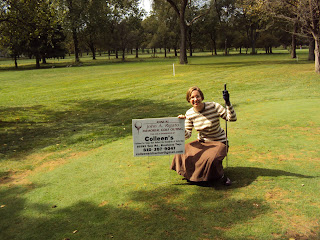 I originally wasn't going to be able to make it, so I sponsored a hole instead.  Here's me by Hole #12 with the sign at the tee-off place.

It took us a couple holes to figure out that there was a separate tee for men and ladies.  Then Christina and I decided we were going to definitely use whatever handicap we could get.  Vincent managed to get in some practice time prior to the day, so he could actually hit the ball pretty well...except it kept going into the trees.

There was actually a new car being offered if you got a hole in one, and Vincent ALMOST got it...his ball was the perfect length and everything but it was 10 feet to the left of the hole.  It was a nice car, too...but he'd have had to rent it to me for a couple years until he was old enough to get his driver's license.

﻿ ﻿ We drove our golf carts around all over the place - and almost got lost a couple times amongst the hills and trees on the golf course.  Plus there were 3 sets of 18 holes, so we were having trouble figuring out which flags we were supposed to follow at first.

﻿ ﻿ We were also pretty lousy putters.  I think this was the longest put I made successfully, at Hole #12.

It was REALLY cold in the morning, then it warmed up/sun came out, then it got cold again.  But nobody got sick and I actually by pure luck won a closest to the pin for ladies.  Then Christina made out like a bandit at the raffle with 3 separate prizes.

So all in all it was a fun day, nobody froze to death, and nobody hit anybody else with golf balls or clubs.  Although once it looked like a squirrel was planning to run off with Vincent's golf ball.

Maybe we'll do it again next year. 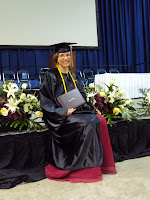